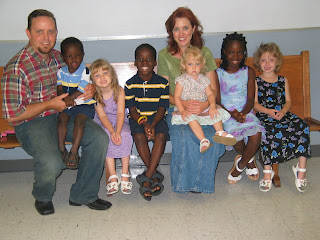 Taken just outside the courtroom 2007
In 2004, we met 16-year-old Stacey, a quiet girl who grew up in the inner city. Good friends of ours worked at the downtown mission where she came for a free meal and Christian discipleship. Her parents had been in and out of prison and she was raised by her apparently bipolar grandmother. Not a stable family upbringing.
When Stacey became pregnant, her grandmother informed her that she would have to find a new place to live after the baby was born. Shortly after beautiful Mariah was born, she and Stacey moved in with us. She quickly became a part of the family. Kyle and I treated her like a daughter, Elena and Chloe loved her like a big sister. 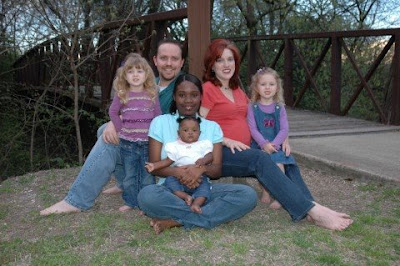 Elena, Chloe, Stacey and Mariah, and Lydia in my belly 2005

Nine months later, Stacey chose to leave. We were heartbroken. But Stacey really opened our eyes to the possibility of adoption. Kyle and I have talked about adopting since courtship, but the idea of spending upwards of $20,000 to do so has always been a roadblock.
While Stacey lived with us, we got to know her cousin, Pedro. He grew up with her, raised in the same house. He was much more independent though, determined not to stay in that environment for any length of time. He stayed with friends as much as possible, going from one family to the next, so as not to wear out his welcome. We had told him if he ever needed a safe place to stay, to call us.
Shortly after Stacey moved out, we called Pedro again with our offer. In 2005, when he was 17, Pedro moved in. He has been a wonderful addition to our family since. 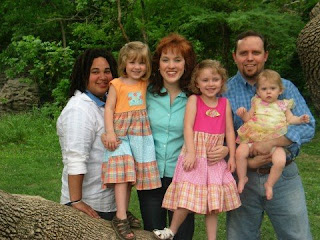 Pedro, Chloe, Elena, Lydia 2006
One year after Pedro moved in, Kyle and I started planning for Baby #4. At the same time, we read an article in “Above Rubies” magazine about Liberia and the many children who were orphaned as a result of the 14-year civil war. A family who went to Liberia as missionaries and ministered at several of the orphanages wrote the article. They were shocked by the substandard conditions - no running water, no electricity, and children who wanted nothing more than a loving family to care for them. My heart was really pricked.
I asked Kyle to read the article. When Kyle put the magazine down, his first words were: "Do you think we should adopt a boy or a girl?" I was stunned. This was completely out of character for Kyle. I figured it had to be the Lord.
We decided to pursue adoption as a step of faith. We read all the scripture about caring for orphans and prayed that God would provide.
Our plan was to adopt a boy (since we apparently can't produce one!) For some reason, I kept jokingly referring to the "kids we adopt". Soon, we had both opened our hearts to 2 boys. When we heard about a sibling group of 3 that needed a home (two boys and a girl), my heart skipped a beat. I felt like I couldn't breathe. For some reason those three really got my attention. Kyle was sure I was nuts, and after much discussion (a week's worth, to be exact), I agreed with him. Who in their right mind would adopt three children at once???
But then we started searching the scriptures. We waited a week, before it occurred to us to pray about it!
We kept coming upon scriptures about walking by faith, God's providence, trusting God, and of course, the verses about caring for orphans and widows. We decided that this was God's will for us and nervously pushed forward. As the adoption wait progressed, we fell in love with these three children an ocean away. 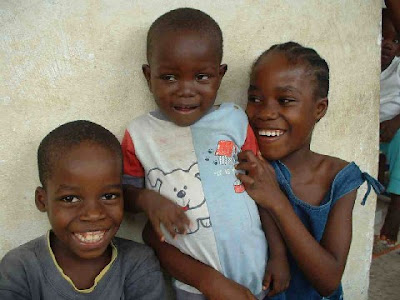 Ever-smiling Isaac, mischievous Daniel, and sweet Maya
taken just outside the Acres of Hope orphanage
Through various adoption ministries, we received over $25,000 in grants and donations. God did indeed provide for the orphans He loves. He is "a father to the fatherless. . .God sets the lonely in families." (Psalm 68:5-6)
On April 6, 2007 we became the very blessed parents of Maya, Isaac, and Daniel, from Liberia, West Africa.
God is good. . .all the time!