This video brought to you by Shaohannah Chapman, daughter of Steven Curtis Chapman.
Precious!

Tonight, we finished up our study of Claude Monet. I read books to them about Monet while we're all at the table for lunch, so all the kids are involved. I hold up the book to the babies, who do not want to be left out of our studies, and ask: "You know who painted this?" Because they've heard his name about 50 times by this time, they yell out: MONET! So funny.
So, halfway through the book was this painting: 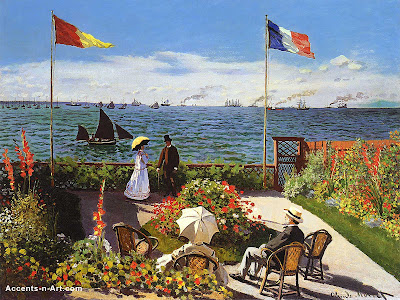 Before I had a chance to say anything about it, Elena said, "See that painting of the couple and the man in the hat? That's Monet's father." Pedro and I looked at each other in a kind of "How'd she know that?" way. As I read further, I found she was right. Elena loves art and apparently has a great memory for it. She aspires to be "a mommy and an artist." Of course, we totally support her in this. She's got her priorities right! 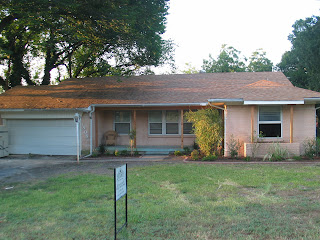 Kyle and his good friend, Ed, bought this house to renovate and flip. The seller was really upside down on it, and we got a great price. The guys are having so much fun on this; it's been really fun for Gretchen and I to see our men so driven. 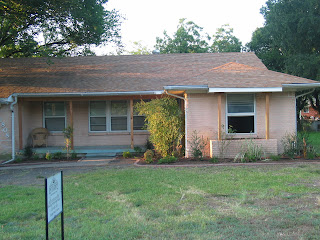 This picture was taken after one week of work. While waiting on the foundation crew, they put in new landscaping and gave the house a really pretty appearance. Sure made the neighbors happy! 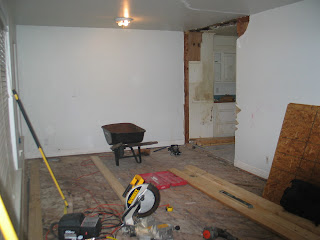 Ok, the below picture's sideways, but you get the idea. The subfloor was rotted in several places. When Pedro gave up his Saturday to work with Kyle, he fell in twice! 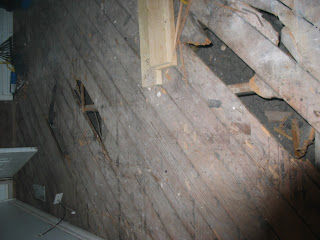 This is one of the bathrooms, but you knew that right? 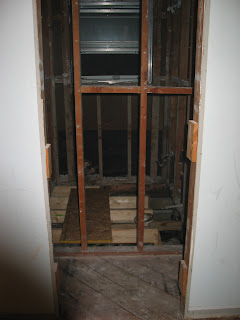 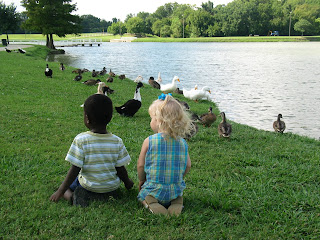 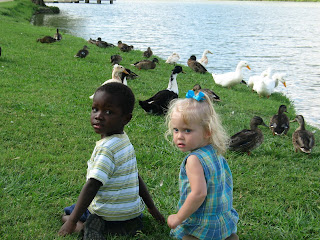 These two haven't always lived in perfect harmony. Actually, perfect is a real stretch, but it's so fun to watch these two tots interacting. They relate to each other like twins. Daniel is 12 months older, but hardly any bigger. "Age-appropriate" doesn't hold much meaning for Daniel. Lydia is his model for how Americans (or Clarks) act, poor thing!
When the triplets first came home, Lydia was quite competitive with this new little one. She became a bully. Whenever Lydia got in trouble (and this is NOT infrequent), it was almost always because she did something mean to Daniel. Now she understands that Daniel's older and she's still the baby, so he's seeing a new nicer side of Lydia-the-Tormentor. Still, Lydia hasn't given up all her bully tendencies. Several times each week she finds herself asking his forgiveness.
Posted by Ginger at 6:47 PM 2 comments:

Last week, I went to Whole Foods during the day (meaning: I had all the little ones with me). They were very well behaved, but it is still a sight seeing two kids in the cart and four hanging onto it. We got a few eyes. One older lady asked: "Are they ALL yours???" with a definite look of disgust. This was my first rude encounter. (I was prepared for this to happen often, but the truth is: people are much kinder than I originally thought!) There's no way I could have convinced this woman that I'm not a worn-out, stressed-out momma, but it got me thinking.

"ALL" these kids are precious to me. I had to work hard and wait long to add each one of them to our family. Life isn't always easy and I definitely don't always get what I want (since when is that a bad thing??), but I have never laughed with such regularity. Everyday I laugh. Everyday I get at least a dozen hugs and kisses. Everyday I have multiple reasons to smile. I'm proud of my children. My kids are my joy.

Case in point: Sunday morning, we were awakened at 7:15 am by the sound of kids making noise. It is very unusual for them to wake before us (not that they sleep late!), so we drug ourselves out of bed to investigate. When we went into the girls' room, we found all four of them up and dressed for church! Maya got Lydia out of bed, changed her diaper and got her dressed, bloomers and all! As we stood there in amazement, Isaac came walking in from the bathroom. He was fully dressed as well. They all explained that they wanted to surprise us. So, we had a relaxing morning getting ready for church. People wonder how I come to church looking so rested and relaxed. My kids are my greatest blessings.
Posted by Ginger at 10:55 PM 6 comments:

Fields of the Fatherless 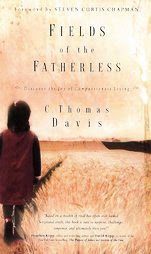 I've been reading this book by C. Thomas Davis and it is changing my heart! I knew that God cared for the fatherless and widows and asks us to do the same, but did you know that caring for orphans and widows is mentioned 60 times in the Bible?? I was stunned.
Adopting isn't just about adding to your family. It's about saving a life. I've lost count of how many precious orphans we have prayed for, that they would live to be adopted. There is an interesting phenomena among families who adopt from Liberia. They almost always adopt more than one child (adopting three is actually quite common among these families), and many of the children are adopted because of medical necessity. The miracle of adoption is life.
I just received this email from a friend of mine, Jenny, a fellow adoptive Mom. Jenny and her husband have five biological sons, then adopted four girls from Liberia. They just recently had another baby- another precious girl. Jenny is so passionate, it's contagious:

Occasionally I hear people wonder out loud if adoption is really the most "efficient" way to help the orphan crisis. It may seem like a lot of time and resources are poured into a relatively small number of children, when in theory more could be helped by contributing to some type of institutional setting that could numerically care for more.
I believe Jesus was on to something though when He took just 12 disciples under His wing. I also believe He knew what He was doing when He designed the family. Relationships, not institutions, change people. And relationships are rarely efficient, they are time-consuming and costly.
Psalm 68:6 says that God sets the lonely in families. There are a lot of lonely "orphan" people in this world, and they are not looking for a ministry or an institution, they are seeking a friend, some type of family to belong to.
Posted by Ginger at 10:42 PM 7 comments:

I've been published! Well, sort of. I wrote an article for our local homeschool association and it was printed in the newsletter. "Entertaining Toddlers" was all about how to keep littles occupied while schooling the big kids. This month, I submitted another article - "Raising Little Mommies and Daddies". The theme is the value of teaching children to work. I've gotten a good response. This is the stuff that really makes me smile.

In other news:
I dove headlong into our homeschool association this year. I'm leading a book club, studying "A Charlotte Mason Companion" and I'm really looking forward to it. I will also be heading up a Keepers At Home group for a small group of homeschool mothers and daughters, including my own sweet girlies, Maya, Elena, and Chloe. I made the mistake of telling them all about it as soon as I had a group assembled. (I was so giddy about it, I just couldn't wait!) For days, they've been asking when they're going to "take that class where we learn to cook and sew and knit". I broke my 20 minute rule: Give kids 20 minutes notice for any fun activity, just in case.
Posted by Ginger at 11:46 PM 3 comments:

It's Not Always Easy

Today, I found Maya crying at the table. Everyone informed me that she was missing her mother. I picked her up and she would not let go of me. And she would not stop crying. She hung onto me as we walked upstairs to be alone and talk. I prayed for Maya, and together we prayed for her birthmother.
Because of her age, Maya was the closest to her birthmom and has the most memories. She talks about her birthmom a lot, especially when I do her hair.
It's crying days like these that make me wonder what her birthmom did that I don't do, or ways that her birthmom was different or better than me. Then I remind myself that it isn't about me. I need to put away self-centered thinking and focus on my grieving daughter.
Maya wrote a letter to her mom and Elena helped her with the spelling. Elena and Chloe became very compassionate and we all had a very sweet group hug that made me think of "Little Women".
We are so blessed to have this tender-hearted girl in our family. I'm so grateful for the loving sacrifice her birthmother made so that we could enjoy her in our family.
Posted by Ginger at 2:35 PM 2 comments: 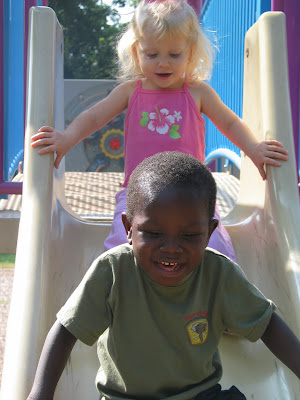 Last week, we got together with a family that recently adopted from Liberia. They have four biological boys and adopted Mowolo, a 6-year-old boy and Kebeh, a 2-year-old girl. We met at the park for a play date. Everyone was sweating, but I was surprisingly tolerant of the perspiration. You all would have been proud of me!

Isaac and Maya were thrilled to see their old friends from the orphanage. Mowolo ran up to Isaac and they gave each other a big bear hug. I'm so bummed that I wasn't quick enough to get a picture of that. So sweet! I was able to encourage this new adoptive mommy (which I LOVE doing) and our kids had a fantastic time playing together. 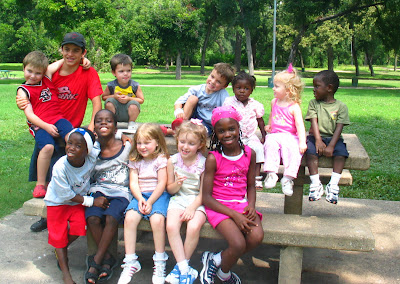 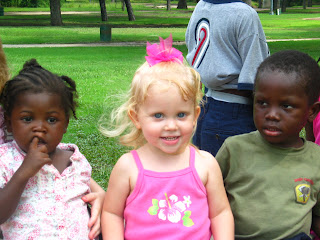 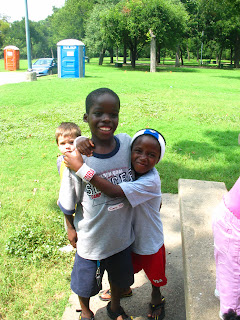 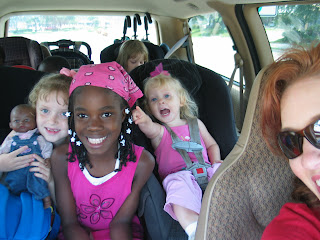 This pretty much sums up Lydia's current phase: 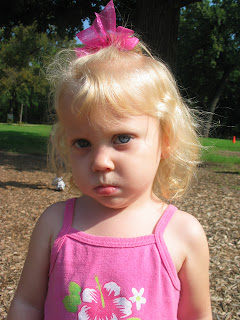 Can someone please tell me that I'll survive until she's three? I love her, fits and all, but I'll be happy to be past this illogical age. (There's no reasoning with a 2 year old, you know!)

I do think this picture is hilarious. Fit-throwing pictures are some of my faves, believe it or not.

Praise God! After 2 1/2 long days of fever and tummy ache, Isaac is finally better! Since he hasn't been eating, he's gotten really skinny. Seeing him like that reminds me so much of one of the pictures we received while the triplets were still in the orphanage. I hated it. Isaac was so skinny and he just looked hungry. I didn't share the picture with too many people because it made me too sad to look at it. Here it is: 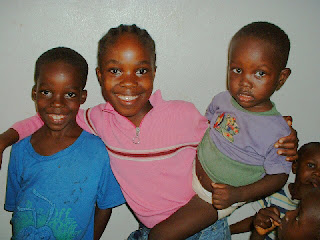 I haven't needed to give any of my kids antibiotics for any illness. (After successfully treating myself for Strep throat with just herbs, I'm now much more confident in herbal remedies.) My kids occasionally get fevers that last a few days and go away, but they haven't had anything more than that in years. (I've got a great cure for ear infections, if you're interested.) Nevertheless, I always start to doubt myself on Day 3. Today was Day 3 and I was really praying for him. Suddenly at lunchtime, he had an appetite. After half a sandwich, his demeanor changed completely. He is acting like himself again!

God is so good. He provides everything we need for health and life!

Jim and Michelle Duggar just added another girl to their family. They now have 17 children and aren't ready to quit yet. This sweet family has really embraced God's Word that "children are a blessing from the Lord." Here's the story:
Duggars Have Another

In case you aren't already familiar with this Arkansas family that has frequented the Discovery Channel, they have a flawless witness. Their kids are well-behaved, joyful Christians, they live debt-free, and they clearly enjoy their children.
Posted by Ginger at 3:12 PM No comments: